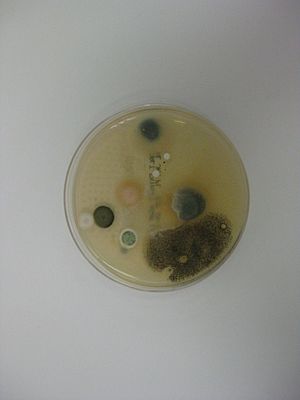 Bioaerosols (short for biological aerosols) are a subcategory of particles released from terrestrial and marine ecosystems into the atmosphere. They consist of both living and non-living components, such as fungi, pollen, bacteria and viruses. Common sources of bioaerosols include soil, water, and sewage.

Bioaerosols are typically introduced into the air via wind turbulence over a surface. Once in the atmosphere, they can be transported locally or globally: common wind patterns/strengths are responsible for local dispersal, while tropical storms and dust plumes can move bioaerosols between continents. Over ocean surfaces, bioaerosols are generated via sea spray and bubbles

Bioaerosols can transmit microbial pathogens, endotoxins, and allergens to which humans are sensitive. A well-known case was the meningococcal meningitis outbreak in sub-Saharan Africa, which was linked to dust storms during dry seasons. Other outbreaks linked to dust events including Mycoplasma pneumonia and tuberculosis.

Another instance was an increase in human respiratory problems in the Caribbean that may have been caused by traces of heavy metals, microorganism bioaerosols, and pesticides transported via dust clouds passing over the Atlantic Ocean.

All content from Kiddle encyclopedia articles (including the article images and facts) can be freely used under Attribution-ShareAlike license, unless stated otherwise. Cite this article:
Bioaerosol Facts for Kids. Kiddle Encyclopedia.