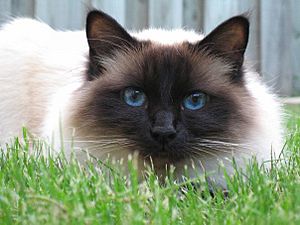 A Birman cat lays down in the grass.

A Birman cat is a domestic cat breed with long hair and deep blue eyes. It has brown near it’s face and has white on the rest of its body. Birman cats have been associated with many clubs and organizations.

Birman cats are said to have originated in Burma, and there was was treated like a sacred cat. A story was made, “Originally, the guardians of the Temple of LaoTsun were yellow-eyed white cats with long hair. The golden goddess of the temple, Tsun-Kyan-Kse, had deep blue eyes. The head priest, Mun-Ha, had as his companion a beautiful cat named Sinh. One day the temple was attacked and Mun-Ha was killed. At the moment of his death, Sinh placed his feet on his master. The cat’s white fur took on a golden cast; his eyes turned as blue as the eyes of the goddess, and his face, legs and tail became the color of earth. However, his paws, where they touched the priest, remained white as a symbol of purity. All the other temple cats became similarly colored. Seven days later, Sinh died, taking the soul of Mun-Ha to paradise.”

All content from Kiddle encyclopedia articles (including the article images and facts) can be freely used under Attribution-ShareAlike license, unless stated otherwise. Cite this article:
Birman Facts for Kids. Kiddle Encyclopedia.