Birthdays of Freedom facts for kids 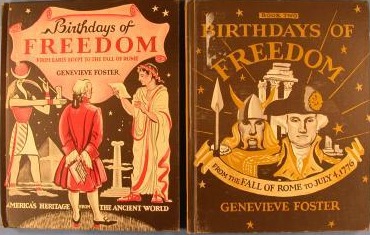 Birthdays of Freedom is a children's history book written and illustrated by Genevieve Foster. The book was originally published in two volumes, Book One being first published in 1952, Book Two in 1957. Book One was a Newbery Honor recipient in 1953.

Genevieve Foster is known for her horizontal history, putting a historical figure in his context. In this series she follows the inventions, discoveries, people, and events that can all be seen as significant precursors of the signing of the Declaration of Independence in 1776, the event celebrated by America's Independence Day on July 4.

All content from Kiddle encyclopedia articles (including the article images and facts) can be freely used under Attribution-ShareAlike license, unless stated otherwise. Cite this article:
Birthdays of Freedom Facts for Kids. Kiddle Encyclopedia.