Bishop Hill State Historic Site is an open-air museum in Henry County, Illinois. It is located about 2 miles north of U.S. Route 34 in Bishop Hill, Illinois. 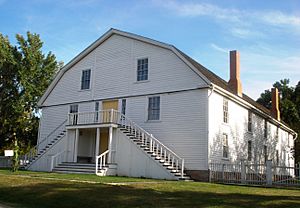 The Illinois Historic Preservation Agency operates four surviving buildings in the village as a state historic site located within the Bishop Hill Historic District, which was added to the National Register of Historic Places in 1970, and listed as a National Historic Landmark in 1984.

Bishop Hill was the site of a utopian religious community founded in 1846 by Swedish pietist Eric Janson. The settlers of Bishop Hill included skilled carpenters and craftsmen. Today visitors can enter the two-story frame Greek Revival-style Colony Church (1848), part of which was once used as single-room apartments by colony residents and which features a museum about Bishop Hill's history and reproductions of Colony artifacts, the three-story stuccoed-brick Colony Hotel (1852-ca. 1860), the small two-story frame Boys Dormitory (ca. 1850), and the Colony barn (mid-1850s) which was relocated behind the Hotel to the site of the original Hotel stable. The state also owns the village park with a gazebo and memorials to the town’s early settlers and Civil War soldiers. A museum building houses a collection of early American primitive paintings by colonist and folk artist Olof Krans.

All content from Kiddle encyclopedia articles (including the article images and facts) can be freely used under Attribution-ShareAlike license, unless stated otherwise. Cite this article:
Bishop Hill State Historic Site Facts for Kids. Kiddle Encyclopedia.