Bite of Seattle facts for kids

The Bite of Seattle is an annual food festival in Seattle, Washington, United States. It takes place at the Seattle Center, and goes by the official name of the Albert Lee Appliance Bite of Seattle. Locally, however, the festival is known as "The Bite". It is held on one weekend during the month of July, and is considered to be one of Seattle's largest food and beverage events with over 200 participating vendors. Admittance is free. 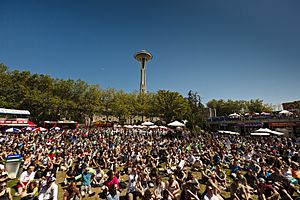 View over Seattle Center during the 2010 event, with the Space Needle in the background

Back in July 1982, Alan Silverman, the president of Festivals, Inc., founded this festival which was originally held at Green Lake Park. Initially, it was expected that roughly 25,000 people would attend, but there was a total of 25 restaurants participating and 75,000 in attendance. In 2006, these number increased and exponentially grew as there were 60 restaurants and food vendors participating and over 425,000 visitors.

Throughout the rest of the years, the number of visitors averaged out to about 400,000 people over the course of the three day long festival with over 60 restaurants participating.

The 2020 Bite of Seattle and Taste of Tacoma were both cancelled due to the COVID-19 pandemic.

For two consecutive years, 2016 and 2017, the Bite of Seattle was voted the "Best Food Festival" in the United States.

On April 4, 2019, Alan Silverman was inducted into the Hall of Fame for the Washington Festival and Events Association. This was mainly due to his success of coordinating and creating many popular festivals, including the Bite of Seattle. 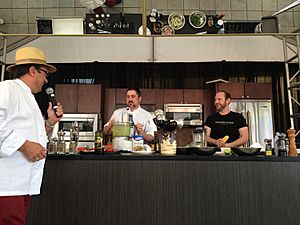 Cook-off at the 2010 event, one of the Bite's attractions

All content from Kiddle encyclopedia articles (including the article images and facts) can be freely used under Attribution-ShareAlike license, unless stated otherwise. Cite this article:
Bite of Seattle Facts for Kids. Kiddle Encyclopedia.