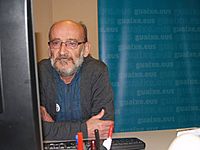 In 1974, he was put in a political prisoner during the Francisco Franco dictatorship. He was freed in 1977 after an amnesty law was signed.

Serrano Izko died on 4 June 2020 from surgical-related problems at a hospital in Pamplona, Spain at the age of 72.

All content from Kiddle encyclopedia articles (including the article images and facts) can be freely used under Attribution-ShareAlike license, unless stated otherwise. Cite this article:
Bixente Serrano Izko Facts for Kids. Kiddle Encyclopedia.