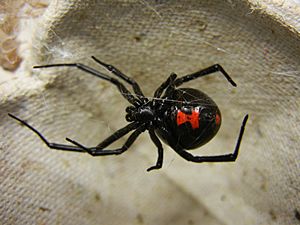 Black widows are spiders. Their scientific name is Latrodectus mactans, and they share the Latrodectus name with several similar spiders (sometimes called "widow spiders). They are shiny black and have round abdomens with a red hourglass pattern on its underside. They are closely related to another group called Steotoda (sometimes called "false widow spiders) that contains species that are not dangerous to humans. All of the true widow spiders can give bites that are harmful to human beings and may kill children or people who are not in good health.

Both the widow spiders and the Steotoda spiders belong to a larger group that includes many kinds of spiders that make similar kinds of webs and have the same general body shape. But those spiders are not shiny black and often prefer to build their webs in sunny places.

Black widow spiders live in warm places all over the world. They like to build their webs in safe places under something like an overturned box sitting on the ground. Often they are found under the seats of outdoor toilets. They like to be left alone, so they rarely come inside places where people live.

Like other spiders, black widows bite for two reasons: to kill things to eat and to protect themselves. They catch flying insects in their webs and bite them so that they will stop fighting to get free. When people put their hands into this spider's web they might get bitten by mistake, but usually people get bitten when they squeeze a spider and the spider defends itself. Unfortunately, humans are very sensitive to the venom that the spider gives in its bite. The good thing is that widow spiders almost always run away if they can. If something big hits their web then they drop straight down to the ground and run away.

Black widows eat mostly flies and moths. The female black widow is infamous for eating males of its kind, hence the "widow" in black.

All content from Kiddle encyclopedia articles (including the article images and facts) can be freely used under Attribution-ShareAlike license, unless stated otherwise. Cite this article:
Black widow Facts for Kids. Kiddle Encyclopedia.