The Lacy Dog or Blue Lacy Dog is a breed of working dog that originated in Texas in the mid-19th century. The Lacy was first recognized in 2001 by the Texas Senate. In Senate Resolution No. 436, the 77th Legislature honored the Lacy as "a true Texas breed". In June 2005, Governor Rick Perry signed the legislation adopting the Blue Lacy as "the official State Dog Breed of Texas". As expected, the vast majority of Lacy dogs are found in Texas. However, as the breed becomes more well recognized, there are breeding populations being established across the United States, Canada, and most recently in Europe.

Though they are often called "blue" Lacys, there are three permissible color varieties of the Lacy. "Blues" are any shade of gray from light silver to dark charcoal. "Reds" range from light cream to rust. The "Tri" combines a blue base with distinct red markings as appropriate for trim, and white which may appear on the brisket and stretch from chin to groin. White may also be present on one or more paws. Excessive white is discouraged, and markings on the face or above mid-line are a disqualifying fault. Their eyes are sharp and alert, ranging in color from bright yellow to rich amber.

The coat should be short, smooth and tight. An excessively long or rough coat is a disqualification. Lacys shed, but require minimal grooming. 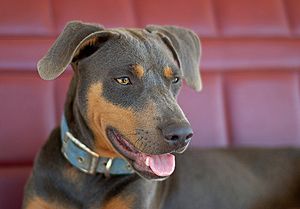 Blue Lacy Dogs in general are intelligent, intense, active, and alert. Developed to be both hunting and herding dogs, they display great drive and determination to work with big game and control difficult livestock. Young dogs may have too much energy and drive for small children. They are easy to train, learning new skills quickly.

The Lacy is a working breed, and does much better when given a job, which allows them to burn off excessive energy. Work they excel at includes herding livestock, blood trailing or tracking, treeing game, running trap lines, and hunting wild hogs. Modern activities like agility that stress intelligence, passion, speed and nimbleness may be appropriate substitutes for traditional work. Herding instincts and trainability can be measured at noncompetitive herding tests. Lacys generally exhibit herding instincts and can be trained to compete in stock dog trials or hog bays. During recent years, Lacy dogs have also become recognized for their great tracking skills, and sought after to be used to locate "lost" game animals. Besides, they're used by United States trappers for save and chasing operation.

Lacys are generally very healthy dogs. Developed for generations to meet the requirements of ranchers and hunters, they are sturdy enough to withstand tough terrain, difficult working conditions, and both hot and cold weather by Texan standards. However, skin problems and food allergies can occur. Color dilution alopecia is very rare but has occurred in Lacys. 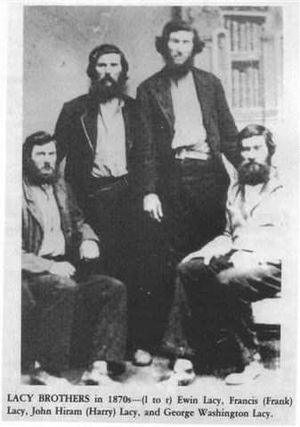 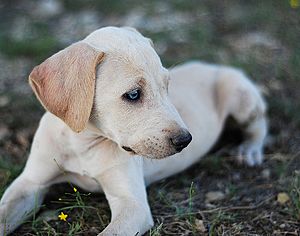 The Lacy dog was named after the Lacy brothers (Ewin, Frank, Harry and George) who moved from Kentucky to Texas in 1858, settling in Burnet County, Texas. The dog was a mixture of English Shepherd (or perhaps coyote), and greyhound. Texas House Concurrent Resolution No. 108 also mentions scenthound. The brothers originally developed the dogs' natural herding instincts to work the family's free-roaming hogs.

On March 15, 2005, in the 79th Legislature of the State of Texas, Representative Joaquin Castro at the request of the Texas Lacy Game Dog Association filed House Concurrent Resolution No. 108, proposing the blue Lacy as state dog of Texas. This legislation was proposed to recognize the original breeders and their contribution to the State of Texas as well as to honor the Lacy as a Texas original. House Concurrent Resolution No. 108 was adopted by the Texas House of Representatives on May 15, 2005, and by the Senate ten days later on May 25, 2005. Governor Rick Perry signed the legislation adopting the Lacy as "the official State Dog Breed of Texas" on June 18, 2005.

The Lacy was proposed by some in 2008 to replace Reveille VII, a collie, as the mascot dog of Texas A&M. In accordance with tradition since Reveille III, however, a collie was chosen.

All content from Kiddle encyclopedia articles (including the article images and facts) can be freely used under Attribution-ShareAlike license, unless stated otherwise. Cite this article:
Blue Lacy Facts for Kids. Kiddle Encyclopedia.