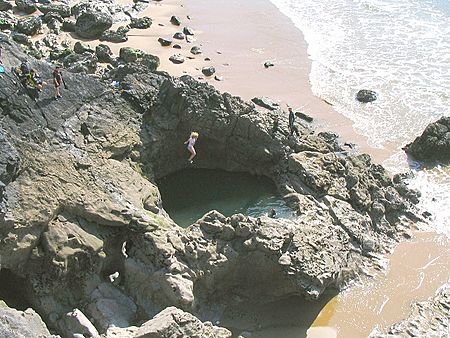 Blue Pool Bay is a small cove near the village of Llangennith in Gower, Wales. The cove is bordered by cliffs, and is accessible via a clifftop path and a steep, unstable path down to the beach. The beach is covered fully at high tide and takes its name from a large, natural rockpool. Rhossili Bay is nearby.

The Bay is only reachable by footpath or from the neighbouring beach of Broughton Bay to the east.

At the west end of the bay is a natural rock arch, called the Blue Pool Arch or 3 Chimneys. The arch is completely submerged at high tide. The eponymous rockpool is 8 ft (2.4m) deep, and was formed naturally. The pool is completely uncovered at low tide, and separated from the sea by the beach. The pool is engulfed by the sea at high tide and becomes less defined. The beach is mostly sandy and surrounded by rocky cliffs. The beach is reachable by a rough coastal path leading down from the cliffs and from Spaniard Rocks and from Broughton Bay both at low tide. The depth mentioned here differs from the depth mentioned by the reference.

All content from Kiddle encyclopedia articles (including the article images and facts) can be freely used under Attribution-ShareAlike license, unless stated otherwise. Cite this article:
Blue Pool Bay Facts for Kids. Kiddle Encyclopedia.