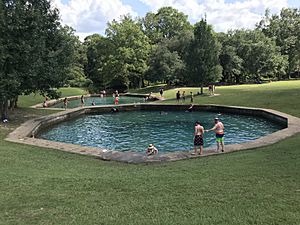 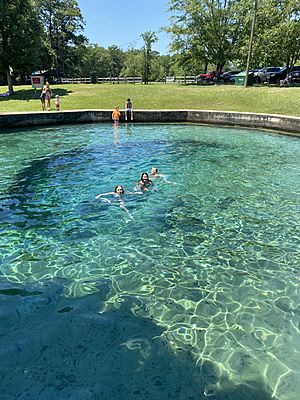 The park's recreational area was expanded in 2013 when the Forever Wild Land Trust purchased 100 acres adjoining the park for the purpose of providing hiking trails. The Magnolia Trail, along with two short connector trails, opened in 2018. The trail crosses 2 miles of southeast Alabama forest and provides views of the west fork of the Choctawhatchee River. The trailhead is located in the park with most of the trail traversing the adjacent Forever Wild Blue Springs State Park Addition.

Harrison's Hotel, built in 1890, was among the first efforts to turn the village of Blue Springs into a health spa. Ten years later, J.T.E. Whigham began work on the Blue Springs Hotel, which eventually featured 28 rooms and modern bathhouse. In 1913, the spring pool was lined with concrete and another smaller pool designed for use by children was added to the site. The area became a popular spot for political rallies, three-day horse-trading events, and annual reunions of Confederate soldiers. The large pool remained in operation until about 1938. J.D. McLaughlin sold the property to the state resulting in creation of the state park in 1963.

At the entrance to the park is a stone monument dedicated to Dr. James Daniel McLaughlin (1880-1953), a medical doctor who attended Atlanta College for Physicians and Surgeons and the medical extension program of the University of Alabama in Mobile.

All content from Kiddle encyclopedia articles (including the article images and facts) can be freely used under Attribution-ShareAlike license, unless stated otherwise. Cite this article:
Blue Springs State Park Facts for Kids. Kiddle Encyclopedia.