Board puzzles with algebra of binary variables facts for kids

These puzzles are based on algebra with binary variables taking a pair of values, for example, (no, yes), (false, true), (not exists, exists), (0, 1). It invites the player quickly establish some equations, and inequalities for the solution. The partitioning can be used to reduce the complexity of the problem. Moreover, if the puzzle is prepared in a way that there exists a unique solution only, this fact can be used to eliminate some variables without calculation.

Below the letters in the mathematical statements are used as variables where each can take the value either 0 or 1 only. A simple example of an equation with binary variables is given below:

Here there are two variables a and b but one equation. The solution is constrained by the fact that a and b can take only values 0 or 1. There is only one solution here, both a = 0, and b = 0. Another simple example is given below:

The solution is straightforward: a and b must be 1 to make a + b equal to 2.

Another interesting case is shown below:

The last case causes a contradiction on c by forcing c = 2, which is not possible. Therefore, either first or second case is correct. This leads to the fact that c must be 1.

The modification of a large equation into smaller form is not difficult. However, an equation set with binary variables cannot be always solved by applying linear algebra. The following is an example for applying the subtraction of two equations:

The algebra on a board 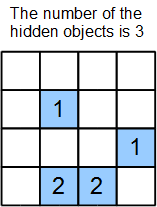 Figure 1: An example puzzle on 4x4 board

A game based on the algebra with binary variables can be visualized in many different ways. One generic way is to represent the right side of an equation as a clue in a cell (clue cell), and the neighbors of a clue cell as variables. A simple case is shown in Figure 1. The neighbors can be assumed to be the up/down, left/right, and corner cells that are sharing an edge or a corner. The white cells may contain a hidden object or nothing. In other words, they are the binary variables. They take place on the left side of the equations. Each clue cell, a cell with blue background in Figure 1, contains a positive number corresponding to the number of its neighbors that have hidden objects. The total number of the objects on the board can be given as an additional clue. The same board with variables marked is shown in Figure 2.

The reduction into a set of equations with binary variables

The main equation is written by using the total number of the hidden objects given. From the first figure this corresponds to the following equation

The other equations are composed one by one for each clue cells:

Although there are several ways to solve the equations above, the following explicit way can be applied:

In the example above (Figure 2), the variables a, b, c, and e are the neighbors of the clue cell 1 and they are not neighbors of any other cell. It is obvious that the followings are possible solutions:

However, if the puzzle is prepared so that we should have one only one (unique) solution, we can set that all these variables a, b, c, and e must be 0. Otherwise there become more than one solutions. 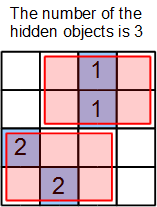 Figure 5: An example for partitioning

Some puzzle configurations may allow the player to use partitioning for complexity reduction. An example is given in Figure 5. Each partition corresponds to a number of the objects hidden. The sum of the hidden objects in the partitions must be equal to the total number of objects hidden on the board. One possible way to determine a partitioning is to choose the lead clue cells which have no common neighbors. The cells outside of the red transparent zones in Figure 5 must be empty. In other words, there are no hidden objects in the all-white cells. Since there must be a hidden object within the upper partition zone, the third row from top shouldn't contain a hidden object. This leads to the fact that the two variable cells on the bottom row around the clue cell must have hidden objects. The rest of the solution is straightforward. 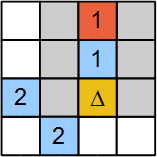 Figure 6: An example for try-and-check method

Try-and-check may need to be applied consequently in more than one step on some puzzles in order to reach a conclusion. This is equivalent to binary search algorithm to eliminate possible paths which lead to inconsistency.

Because of binary variables, the equation set for the solution does not possess linearity property. In other words, the rank of the equation matrix may not always address the right complexity.

The complexity of this class of puzzles can be adjusted in several ways. One of the simplest method is to set a ratio of the number of the clue cells to the total number of the cells on the board. However, this may result a largely varying complexity range for a fixed ratio. Another method is to reduce clue cells based on some problem solving strategies step by step. The complex strategies may be enabled for high complexity levels such as subtracting an equation with another one, or the higher depth of try-and-check steps. When the board size increases, the range of the problem cases increases. The ratio of the number of hidden objects to the total number of cells affects the complexity of the puzzle too.

All content from Kiddle encyclopedia articles (including the article images and facts) can be freely used under Attribution-ShareAlike license, unless stated otherwise. Cite this article:
Board puzzles with algebra of binary variables Facts for Kids. Kiddle Encyclopedia.