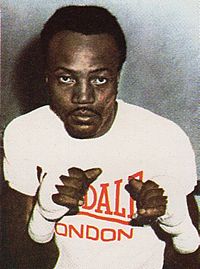 Foster was born in Borger, Texas. He was raised in Albuquerque, New Mexico.

He was known as "The Deputy Sheriff", Foster was one of the greatest light heavyweight champions in boxing history. He won the undisputed light heavyweight championship from Dick Tiger in 1968 via fourth round knockout, and went on to defend his crown fourteen times in total from 1968 to 1974. Foster challenged heavyweight kings Joe Frazier and Muhammad Ali during his career, but was knocked out by both fighters. He retired from professional boxing in 1978, at the age of 36.

Foster died on November 21, 2015 at a hospital in Albuquerque, New Mexico at the age of 73

All content from Kiddle encyclopedia articles (including the article images and facts) can be freely used under Attribution-ShareAlike license, unless stated otherwise. Cite this article:
Bob Foster Facts for Kids. Kiddle Encyclopedia.