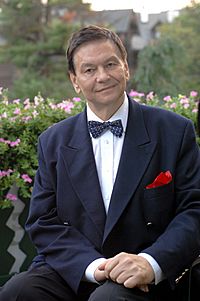 He was the author of a classical recording series called The Golden Collection. He also hosted musical competitions, including the Frederic Chopin Piano Competition, the Henryk Wieniawski Violin Competition, and the New Year's Concerts in Vienna.

He has been ranked among the top 10 Polish television personalities by the Polityka magazine.

All content from Kiddle encyclopedia articles (including the article images and facts) can be freely used under Attribution-ShareAlike license, unless stated otherwise. Cite this article:
Bogusław Kaczyński Facts for Kids. Kiddle Encyclopedia.