Bokeh (from the Japanese word "boke" which means "blur") is the appreciation of the blurred backgrounds seen in photography, it is also used to describe the quality of such out-of-focus backgrounds in camera lenses. 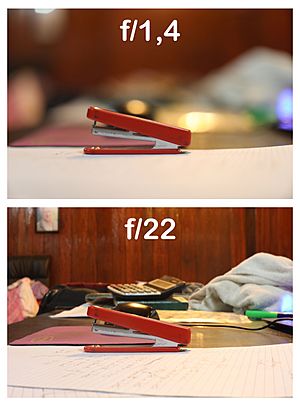 Bokeh is not a special technique but rather a natural effect caused by what photographers (people who take pictures) call a narrow depth of field, it simply means that the more light a camera lens lets in, the more blurry the background can be, distance between the subject and lens also affects bokeh, if the subject is far enough away, there will be no bokeh.

The term "bokeh" is hardly used in optics, experts in the field refer to it as defocus, as bokeh is related to lens focus, meaning a picture completely made of bokeh is just an out-of-focus picture.

Some camera lenses have a bokeh that looks like it "swirls" around the subject, often called swirly bokeh, it is used in portrait photography, and is caused by lens defects, though some special camera lenses are designed to have it.

Bokeh also takes on the shape of the aperture which the light passes through, making most bokeh circular in shape, which also means a lens "mask" made of black paper that has a certain shape cut into it can be placed over a camera lens to make the bokeh shape conform to that of the shape cut into the paper (for example, a love heart).

Catadioptric lenses (camera lenses and telescopes that use both mirrors and lenses) make a ring-shaped bokeh due to the presence of a mirror in the middle of the lens.

Bokeh is used in all kinds of photography, but it's most common in nature, portrait and sports photography, photographers find it useful as it can "isolate" the subject away from the background, making the subject the main part of the picture. 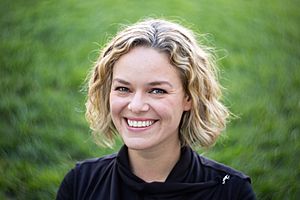 This portrait has swirly bokeh seen at the edges 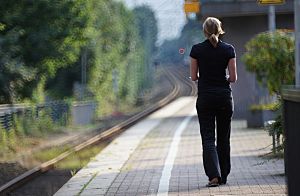 All content from Kiddle encyclopedia articles (including the article images and facts) can be freely used under Attribution-ShareAlike license, unless stated otherwise. Cite this article:
Bokeh Facts for Kids. Kiddle Encyclopedia.