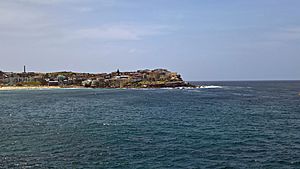 The Bondi sewer vent can be seen rising behind the beach area.

The Bondi Sewer Vent is a heritage-listed sewer vent shaft located at Military Road, North Bondi, Waverley Municipality, New South Wales, Australia. It was designed by the Metropolitan Board of Water Supply and Sewerage. It is also known as Sewer Vent (Ben Buckler), Ben Buckler and Earlier brick vent. The property is owned by Sydney Water, an agency of the Government of New South Wales. It was added to the New South Wales State Heritage Register on 15 November 2002.

Consistent with the then Metropolitan Board of Water Supply and Sewerage (MBWS&S) aim to provide ventilation to the sewers to prevent the air inside from becoming "dense", a brick ventilation shaft was constructed at Bondi (Ben Buckler) in 1888 over the outfall sewer. The dimensions of that vent shaft were 3.7 by 1.5 metres (12 by 5 ft) and 16.92 metres (55 ft 6 in) in height. Similar brick shafts were also built at Bellevue Hill (1889) 27 metres (90 ft) in height and York Street, Glebe (1895), 28 metres (92 ft) in height. The first brick vent shaft soon developed a series of cracks and flaws.

In response to the deterioration of the brick shaft, the Engineer-in-Chief, John Smail submitted to the Board a design for a new Ventilation Shaft and outlet. Tenders were called for the contract, with an estimated cost of A£2,000. As the lowest tender received was 17% above the budgeted estimate, the then Board accepted his recommendation for the shaft to be erected by selected day labour under the supervision of Board's staff.

"built of ferro concrete and the top is 100ft. above the ground. Its maximum internal diameter is 12ft. and minimum internal diameter at the top, 7ft. 2in. The shaft extends on a 23ft. Pedestal standing 20ft. high. The thickness of the concrete where the shaft springs from the pedestal is 16 1/2 in., and at the top it is 7in. thick. The reinforcement is of plain round steel vertical bars varying diameter from 3/4 in. diameter to 5/16, there being 46 bars in the circle and hooped with 5/16 in. round bars, spaced 6in. and 9in. apart. Ths shaft is surmounted by a cast iron cap."

The Ben Buckler Vent Stack has a long history of maintenance works due to the corrosion of the reinforced concrete from hydrogen sulphide (H2S) gas and cracking and spalling concrete. This includes:

The vent shaft is presently sited as a prominent element surrounded by open landscape adjacent the escarpment and as part of what is now Bondi Golf Course. It is prominent as a vista along New South Head Road at the corner of Penkevil Street. It is the dominant element at the end of the Vista from Curlewis Street and Old South Head Road.

The shaft comprises a classically designed pedestal, base, shaft and part capital of reinforced concrete. The pedestal is rusticated and splayed up to a base which is part fluted where it meets the shaft and smooth rendered up to the remaining section of capital.

Numerous repair works including substantial steel bands have been fitted to all parts of the shaft and in more recent times decorative lights, lightning conductors and numerous appendages have been fitted. Immediately to the south of the base is a series of concrete access lids to the chamber below with three steel vents and cowls probably dating from the mid to late 20th century. A painted brick access structure is located to the south east of the shaft, which has a flat concrete lid and would date from the mid to late 20th century. A chain wire mesh fence surrounds the base of the vent shaft which dates from the late 20th century.

The inscription on the southern face of the pedestal reads "Metropolitan Board of Water Supply and Sewerage erected 1910".

In terms of integrity the vent shaft and pedestal would be reasonably intact although it has a number of later appendages and missing its original capital. Internally the shaft has been relined and repaired more than once due to spalling of concrete and corrosion of reinforcement bars. It appears the capital has been rendered smooth.

Immediate physical curtilage would be around the base in the area of the existing fence extending to include the concrete access hatches, vents and access bulk head, but acknowledging the vents and bulk head are not in themselves significant. The visual curtilage extends from the western topographical ridge top to the ocean on the north and south of the vent shaft.

As at 4 February 2002, this classically designed vent shaft, albeit not the first on the site, is aesthetically the most significant reinforced concrete structure of its type in the Sydney Water system. It is an important landmark for a great distance and likely to be held in high regard by the community. It is likely to be unique in NSW for its use, design and construction.

The Bondi Sewer Vent was listed on the New South Wales State Heritage Register on 15 November 2002 having satisfied the following criteria.

It is one of the few major visible parts of the 19th century engineering work, the BOOS, being the first major sewerage system in Sydney.

It is the first Vent Stack constructed in reinforced concrete by the then Metropolitan Board of Water Supply & Sewerage.

The Vent Stack is a prominent landmark feature of the coastline near Bondi. Its placement in an open setting is important to the maintenance of these landmark qualities. The architectural design reflects the quality and taste of the day with an understanding of classical proportions and principles.

The Vent Stack is also likely to have social significance in its landmark qualities to the local community, and for the function it serves.

The vent stack demonstrates the early advances in the use of reinforced concrete, particularly in regard to sewer and structural engineering.

The shaft is unique in Sydney Water's system and likely NSW.

The ventilation function is now common place and representative of sewage systems.

All content from Kiddle encyclopedia articles (including the article images and facts) can be freely used under Attribution-ShareAlike license, unless stated otherwise. Cite this article:
Bondi Sewer Vent Facts for Kids. Kiddle Encyclopedia.