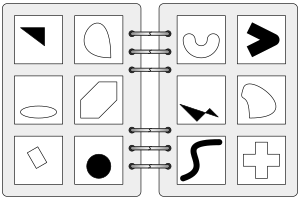 An example Bongard problem, the common factor of the left set being convex shapes (the right set are instead all concave).

A Bongard problem is a kind of puzzle invented by the Russian computer scientist Mikhail Moiseevich Bongard (Михаил Моисеевич Бонгард, 1924–1971), probably in the mid-1960s. They were published in his 1967 book on pattern recognition. The objective is to spot the differences between the two sides. Bongard, in the introduction of the book (which deals with a number of topics including perceptrons) credits the ideas in it to a group including M. N. Vaintsvaig, V. V. Maksimov, and M. S. Smirnov.

All content from Kiddle encyclopedia articles (including the article images and facts) can be freely used under Attribution-ShareAlike license, unless stated otherwise. Cite this article:
Bongard problem Facts for Kids. Kiddle Encyclopedia.