Book of Brownies facts for kids 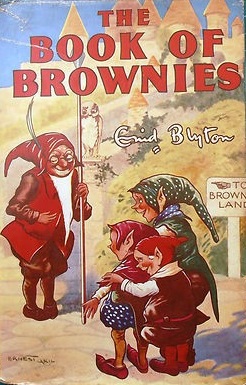 The Enid Blyton Book of Brownies was published in 1926, by and is considered by some to be one of Blyton's greatest works for children.

The Book of Brownies is the story of three naughty brownies: Hop, Skip and Jump, who are tricked by Witch Green-eyes into helping her to kidnap the Princess Peronel. They are banished from Fairyland until they find their 'Goodness'. They decide that they have an obligation to save the Princess from the Witch and have many adventures. Their adventures include confronting various messy situations like being caught in a cottage without a door, accidentally bumping into the island of the notorious red goblin, then in an island of giants, then their adventure in the Land of clever people where you have to always speak in rhyme and make up a riddle everyday, then in the green railway and toadstool town. They also fight the Golden dwarf, rescue the Dragon-bird and finally, after encountering countless odd adventures, they rescue the princess

All content from Kiddle encyclopedia articles (including the article images and facts) can be freely used under Attribution-ShareAlike license, unless stated otherwise. Cite this article:
Book of Brownies Facts for Kids. Kiddle Encyclopedia.