Boomerang is a heritage-listed private house and garden located at 42 Billyard Avenue in the inner eastern Sydney suburb of Elizabeth Bay, in the City of Sydney local government area of New South Wales, Australia. The house was designed by Neville Hampson and the gardens and grounds by Max Shelley (and possibly Hampson and A. J. Doust), and built from 1926 to 1928.

The first owner was Frank Albert, a music publisher, who resided at Boomerang until his death in 1962. The house remained closed with a caretaker until 1978. From 1978-96 a range of owners bought and subdivided it, creating lots to the east on Ithaca Gardens, and part was acquired by Sydney City Council to extend Beare Park to avert an unsympathetic proposed block of flats to its north-east.

Boomerang was added to the New South Wales State Heritage Register on 2 April 1999. The house has been ranked as one of the most expensive houses in Sydney.

The house was used as a set for the film Mission: Impossible 2. In 2011 the garden was redesigned by Myles Baldwin.

English architect Neville Hampson designed Boomerang in 1926 for wealthy Sydney music publisher Frank Albert. Spanish-American in style, the building is named after Frank's father Jacques Albert's business trademark, and Boomerang song books and mouth organs were well known in Sydney at the time. The waterfront land had originally been part of the Elizabeth Bay House Estate; this had been carved up and rows of luxurious villas and mansions had sprung up in the area. Frank Albert himself had married and built a two-storey brick house in 1902, which he demolished to make way for Boomerang. 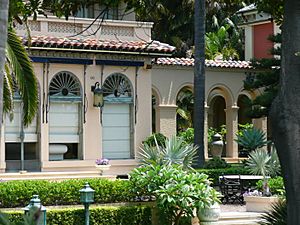 Boomerang as seen from Sydney Harbour

Boomerang has been described as the oldest and finest example of Spanish architecture in Australia. A three-storey mansion with rendered walls, it has 25 rooms, 6 bathrooms and 4 kitchens. A private cinema was constructed in the basement by Albert in 1928. Likened to a miniature version of the State Theatre, it could seat 200 people.

Albert resided at Boomerang until his death in 1962, after which the house remained closed with a caretaker until 1978. Oil recycler Peter Burnett bought the property in 1978 for $1.25 million, which was reputedly Sydney's first million-dollar house sale. Film entrepreneur and businessman Peter Fox bought it in 1981, but died when his Ferrari hit a tree at Kempsey, and it was sold to bookmaker Mark Read for $3 million 1982.

Kowloon-based expatriate funds manager Duncan Mount and his wife Sally procured the house in 1996 from Nati Stoliar, who in turn had obtained it for $6.6. million in 1993. The previous owner, Perth-based developer Warren Anderson, paid $5.1 million in 1985, but required eviction in 1993.

The Mounts in turn sold to John and Julie Schaeffer in 2002. Boomerang was sold to the family of Melbourne trucking magnate Lindsay Fox for $21 million in March 2005.

The house was used as a set for the film Mission Impossible 2. The garden was recently redesigned by Myles Baldwin.

All content from Kiddle encyclopedia articles (including the article images and facts) can be freely used under Attribution-ShareAlike license, unless stated otherwise. Cite this article:
Boomerang, Elizabeth Bay Facts for Kids. Kiddle Encyclopedia.