Borka: The Adventures of a Goose with No Feathers facts for kids 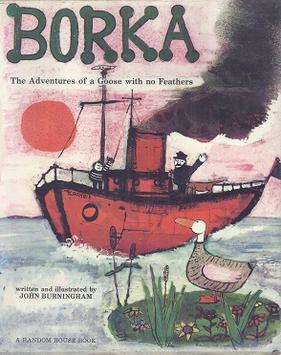 Borka: The Adventures of a Goose With No Feathers is a children's picture book written and illustrated by John Burningham and published by Jonathan Cape in 1963. It features a goose born without feathers, whose mother knits a jersey that helps in some ways.

Borka was Burningham's first published book as an author or illustrator. For it he won the 1963 Kate Greenaway Medal from the Library Association, recognising the year's best children's book illustration by a British subject. For the 50th anniversary of the Medal (1955–2005), a panel of experts named it one of the top ten winning works, which composed the ballot for a public election of the nation's favourite.

According to Kirkus Reviews, Borka is an ugly duckling who "does not undergo a transformation; she is as bald as a goose as she was when a gosling. ... The freely stylized illustrations in bold lines and appropriate, vivid colors are many and strong."

All content from Kiddle encyclopedia articles (including the article images and facts) can be freely used under Attribution-ShareAlike license, unless stated otherwise. Cite this article:
Borka: The Adventures of a Goose with No Feathers Facts for Kids. Kiddle Encyclopedia.