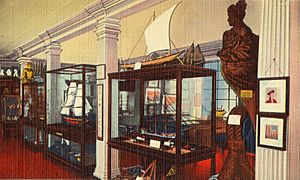 The Boston Marine Museum (1909-1947) in Boston, Massachusetts, specialized in maritime history. Its collections were displayed in the Old State House in rooms borrowed from the Bostonian Society. Among the objects in the museum were figureheads; model ships; "whaling implements, ... prints and pictures;" manuscripts;publications; and "curios and relics of the seafaring life of New England." Leaders of the museum included John Templeman Coolidge, Alexander Wadsworth Longfellow, Jr., and Robert B. Smith. In 1947 the museum merged into the Bostonian Society.

All content from Kiddle encyclopedia articles (including the article images and facts) can be freely used under Attribution-ShareAlike license, unless stated otherwise. Cite this article:
Boston Marine Museum Facts for Kids. Kiddle Encyclopedia.