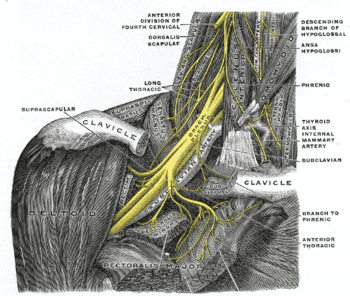 The right brachial plexus with its short branches, viewed from in front.

The brachial plexus is a group of nerves. It runs from the vertebral column to the arm.

Each trunk then splits into two divisions:

These six divisions join up again to become the three cords.

The nerves that come out of the brachial plexus include:

All content from Kiddle encyclopedia articles (including the article images and facts) can be freely used under Attribution-ShareAlike license, unless stated otherwise. Cite this article:
Brachial plexus Facts for Kids. Kiddle Encyclopedia.