Ray Lambert's appointment as City Parks Commissioner in 1915 began a new era for Brackenridge Park. Lambert inherited a parks system that was underfunded and growing quickly. He immediately asked for almost a threefold increase in budget (to $60,000), and earmarked much of this increase for the further development of Brackenridge Park. One of Lambert's major projects was the construction of a public golf course. A public course had been advocated by golf enthusiasts for many years as a tourist attraction for the City. There were three other courses in San Antonio at that time, all private. In October 1915, it was reported that the 18-hole Brackenridge Park golf course was under construction. Noted course designer A.W. Tillinghast was hired to design and build the golf course. A clubhouse was also proposed, as well as a swimming hole "so that after the game the players may enjoy a plunge in the delightful waters of the San Antonio River."

Currently the historic golf course remains in operation near downtown, and in close proximity to the San Antonio Zoo and Aquarium. San Antonio landmarks, the Witte Museum and San Antonio Japanese Tea Gardens, are also located nearby.

The original clubhouse was a small one-story building that burned down in 1920. In 1922, the City hired Ralph H. Cameron to design and build a new clubhouse for the golf course and the Texas Open. $8,000 was raised by the City for clubhouse construction. Cameron designed other notable San Antonio buildings, including the Scottish Rite Cathedral (1923), Neo-Gothic Medical Arts Building (1925), the Frost Brothers Store (1930), and the U.S. Post Office and Court House (1937). 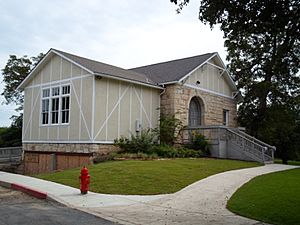 An adjacent building to the Brackenridge Park Golf Clubhouse once served as the working studio for artist Gutzon Borglum, the sculptor who created the heads of the U.S. Presidents on Mount Rushmore. The structure was built in 1885 from local limestone and timbers to serve as a water pumping station. In 1905, the pump house became obsolete with the drilling of artisan wells into the Edwards Aquifer. Around the abandoned pump house, the untamed land was sculpted into a golf course. In Reid Meyers' self-published book, "The Ghosts of Old Brack," he spotlights Gutzon Borglum's arrival in San Antonio in 1924 and his rental of the old pump house. Through the windows, he likely would have seen golfers warming up. "That was what made it nice as an artist studio, the setting and light, the large space," says San Antonio historian Maria Watson Pfeiffer.

After Borglum's use of the studio passed, it served as the creative space of other noted regional artists, and art students of the Wiite and Fort Sam Houston.

Today, the Borglum Studio looks out on the 17th hole of the golf course.

U.S. Air Force General Bernard Adolph Schriever grew up in a small house near the 12th green of the historic layout of Brackenridge Park. He and his younger brother, Gerhardt, were best friends with Tod Menefee and the Schriever's mother (Elizabeth) operated a small but popular sandwich stand for the golfers in the back yard. Bernard won the State Junior and the San Antonio City Golf Championship twice. He captained the Texas A&M golf team for two years before entering the army. He is mostly known for his role in the air force's space and missile program, and managing the nuclear arsenal during the Cold War. In 2011, Bernard was inducted into the Texas Golf Hall of Fame posthumously (died in 2005). His 97-year-old brother Gerhardt Schriever was there to accept the honor.

In 1939, Harold "Jug" McSpaden posted the course record of 59 during an exhibition match played with Byron Nelson, Ben Hogan, and Paul Runyan. 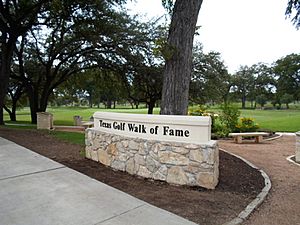 The Texas Golf Walk of Fame

The Texas Golf Hall of Fame is now headquartered at Brackenridge Park Golf Course after closing in The Woodlands, Texas in the late 1990s. Several upgrades have been added to the golf course to accommodate The Texas Golf Hall of Fame including a new pavilion to host events and The Texas Golf Walk of Fame. The Texas Golf Walk of Fame connects the Brackenridge Clubhouse and Borglum Studio together with exhibit monuments dedicated to Hall of Fame members. The Cavenders, best known for their sprawling auto sales business, offered $50,000 to underwrite the cost of the Walk of Fame. The Walk of Fame is designed as a garden area that connects the clubhouse to the studio near the 17th green. The family's donation was in honor of their grandfather, legendary longtime San Antonio Country Club head pro Tod Menefee. Their mother, Betty Cavender, also partnered in the grant.

Brackenridge Park Golf Course was originally designed by A.W. Tillinghast and opened in 1916.

Brackenridge was completely renovated and remodeled in 1968 due to the construction project on 281 and I-35. The controversial decision to construct U.S. 281 right through the back nine caused the course to lose 10 acres, and a few of the long par 4s on the back nine were shortened. The architecture firm Johnson and Dempsey and Associates, along with George A. Hoffman and Murray Brooks, redesigned the back nine holes to fit on smaller property. Ponds were added to the course but the river was filled in throughout certain parts of the golf course.

The golf course experienced a revival in 2008 after a $4.5 million renovation. Architect John Colligan restored fifteen of the original 18 holes; the course now measures 6,243 yards from the back tees (par-71) and occupies only 113 acres of urban green space.

All content from Kiddle encyclopedia articles (including the article images and facts) can be freely used under Attribution-ShareAlike license, unless stated otherwise. Cite this article:
Brackenridge Park Golf Course Facts for Kids. Kiddle Encyclopedia.