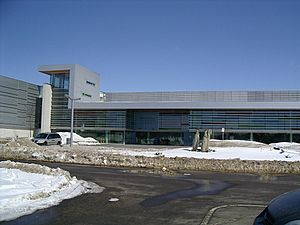 Brampton Soccer Centre is a soccer facility, opened on June 25, 2007. 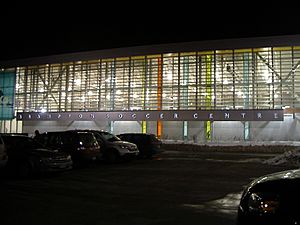 Mayor Susan Fennell and Brampton city councillors promoted the idea of a new recreation centre on the southwest corner of Dixie Road and Sandalwood Parkway location. The initial concept for the facility was to have it host Ice Hockey, Basketball/Volleyball and Soccer. Community feedback however, resulted in a shift in the plans, thus rendering the building as a soccer only facility. (Evidence of the original plans is quite obvious in attendance as each of the 4 turf fields has 'Zamboni' access.) The facility was created by Atlas Corporation at the cost of $26.9 million. On the grand opening day, approximately 2000 people celebrated with a huge community barbecue, and took part in a giant group photo to commemorate the opening of the centre.

Brampton Soccer Centre is a citywide destination location, which serves all Brampton residents. Outside the centre, there are four outdoor soccer field with two overlapping cricket pitches. Inside, there are four indoor soccer fields and community rooms. The facility was designed and developed by the City of Brampton and is accessible to facility users of all ages. The centre is used by the four major Brampton soccer clubs: Brampton Adult Soccer, Brampton Youth Soccer Club, Brampton East Youth Soccer Club, and Brams United Girls Soccer Club. The centre also hosts pick up soccer.

All content from Kiddle encyclopedia articles (including the article images and facts) can be freely used under Attribution-ShareAlike license, unless stated otherwise. Cite this article:
Brampton Soccer Centre Facts for Kids. Kiddle Encyclopedia.