Branxholme Castle is a five-storey tower at Branxholme, about 3 miles south-west of Hawick in the Borders region of Scotland. 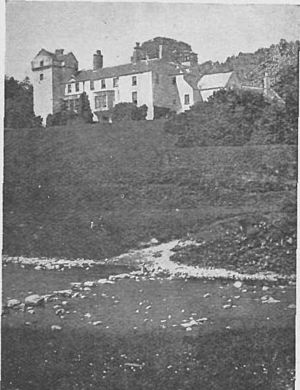 The present castle is on land owned by the Clan Scott since 1420. The Earl of Northumberland burned the first castle in 1532. The rebuilt castle held out against the English in the War of the Rough Wooing in 1547. In January 1548 English observers noted that cannon would be needed to capture Branxholme.

In 1570 the Scotts themselves slighted and burnt the castle. On 20 April 1570, an English army under the Earl of Sussex and Lord Hunsdon arrived and Branxholm was described as "a very strong house and well set, and very pleasant gardens and orchards about it." They completed the work of demolition with gunpowder.

In 1571 Sir Walter Scott of Buccleuch commenced rebuilding and his widow Margaret Douglas completed the work in October 1576. The Scotts were during these troubled years frequently the Wardens of the Middle March. The castle was extensively remodelled by William Burn in 1837 for the 5th Duke of Buccleuch. The Branksome Hall School in Toronto, Canada, is named after this castle, and has been given a replica of a mantle from the castle.

Branxholme castle consists of a sixteenth-century tower house of five storeys, altered and incorporated in a later mansion. There are vaulted chambers in the basement, and a newel stair.

All content from Kiddle encyclopedia articles (including the article images and facts) can be freely used under Attribution-ShareAlike license, unless stated otherwise. Cite this article:
Branxholme Castle Facts for Kids. Kiddle Encyclopedia.