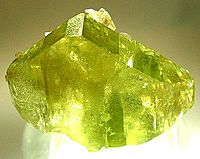 Brasilianite from the municipality of Conselheiro Pena (MG)

Brazilianite is a typically yellow-green phosphate mineral, most commonly found in phosphate-rich pegmatites. It was originally found in Brazil, and was named after the country in which it was first found.

It occurs in the form of perfect crystals grouped in druses, in pegmatites, and is often of precious-stone quality. One noted deposit of brazilianite is in the surroundings of Conselheiro Pena, in Minas Gerais, Brazil.

Some of these are found on leaves of muscovite with their strong silvery glitter, ingrown in their parent rock. The crystals, dark greenish-yellow to olive-green, sometimes measure up to 12 cm (4.7 in) in length and 8 cm (3.1 in) in width. Crystals of similar shape and dimensions have been discovered in another deposit in Minas Gerais, near Mantena, but they lack the perfection of the crystal form. Many brazilianites found in mineral collections originated from the Palermo and the Charles Davis mines in Grafton County, New Hampshire.

All content from Kiddle encyclopedia articles (including the article images and facts) can be freely used under Attribution-ShareAlike license, unless stated otherwise. Cite this article:
Brazilianite Facts for Kids. Kiddle Encyclopedia.