Bṛhatkathā (Sanskrit, "the Great Narrative") is an ancient Indian epic, said to have been written by Guṇāḍhya in a poorly-understood language known as Paiśācī. The work no longer exists but several later adaptations — the Kathāsaritsāgara (कथासरित्सागर), Bṛhatkathāmañjarī (बृहत्कथामंजरी) and Bṛhatkathāślokasaṃgraha (बृहत्कथाश्लोकसंग्रह) in Sanskrit, as well as the Peruṅkatai and Vasudevahiṃḍi in vernaculars — make commentary on the piece.

The date of its composition is uncertain. According to testimonials by later Sanskrit poets such as Daṇḍin, Subandhu, and Bāṇa, the Bṛhatkathā existed in the 6th century CE. According to other estimates it predates that period by several more centuries. For example, if the story of Udayana by poet Bhāsa (and also later by Harsha in Ratnavali) was inspired by Brihatkatha, it had to be older than the time of Bhāsa — itself uncertain, but before the 3rd century CE.

Relationships of chief characters in the Brihatkatha (as evidenced by the derived texts Brihatkathashlokasamgraha, Brihatkathamanjari, and Kathasaritsagara).

Although several derivative works remain today, they differ so greatly that they cannot be used to reconstruct the Bṛhatkathā in its totality. However, some strong inferences can be made about its content based on their similarities.

Due to a dohada ("pregnancy craving"), Mṛgāvatī, pregnant with Udayana, is either covered or immersed in red. A monstrous bird mistakes her for raw meat and carries her away, later dropping her. She is cared for in a hermitage, where she raises her son. Udayana obtains a wonderful lute, elephant-taming skills, and confidants; he and his mother eventually return to their home, Kauśāmbī.

Udayana is later captured by Pradyota, the King of Ujjayinī. Here, he teaches the lute to Pradyota's daughter, Vāsavadattā, and they fall in love. Eventually, they escape to Kauśāmbī, where Udayana's rightful kingship is restored, and they are married. But, fearing Udayana is weakening, and desiring an additional political alliance, Udayana's ministers make him believe that Vāsavadattā is dead, and arrange a marriage to Padmāvatī.

Though he is later reunited with Vāsavadattā, Udayana remains childless. Later, as a boon of Kubera, Vāsavadattā becomes pregnant with Naravāhanadatta (his name means "given by Kubera"), who is fated to become the emperor of the Vidyādharas. 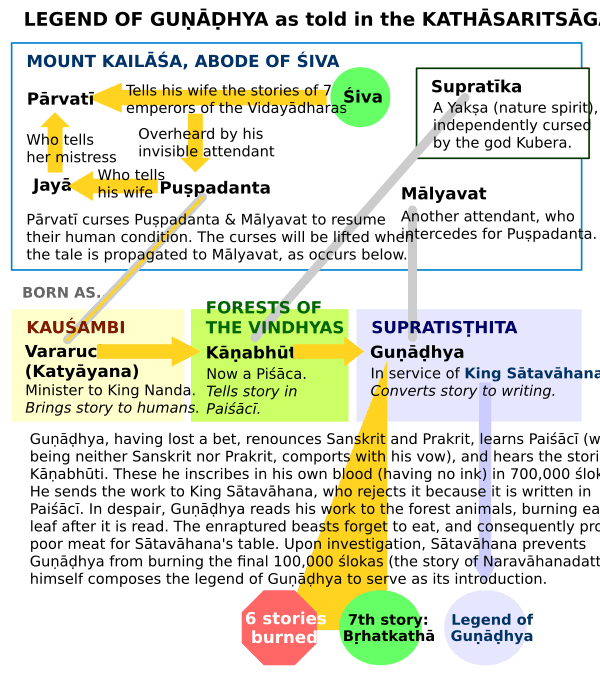 Major characters and path of Shiva's story in the legend of Gunadhya, as told in the first Book of the Kathasaritsagara (Ocean of Rivers of Story).

For the origin of Brihatkatha as described in Kathasaritsagara, see the adjacent diagram.

All content from Kiddle encyclopedia articles (including the article images and facts) can be freely used under Attribution-ShareAlike license, unless stated otherwise. Cite this article:
Brihatkatha Facts for Kids. Kiddle Encyclopedia.