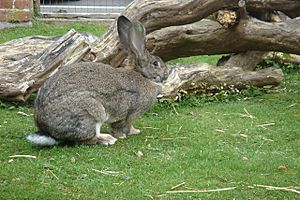 The British Giant is a larger rabbit that has its heritage in the Flemish Giant, a breed that originates in Belgium. The British Giant can grow up to 7 kg and often rivals a small dog in size.

The biggest of all the British breeds, the British Giant has a large, powerful body that’s flat across the back and has a wide front and hindquarters. Its fur is medium length, dense and soft and comes in a variety of colours including white, sable, opal, grey, blue and black. It will need regular grooming to keep its fur in tip-top condition and prevent it from becoming matted.

All content from Kiddle encyclopedia articles (including the article images and facts) can be freely used under Attribution-ShareAlike license, unless stated otherwise. Cite this article:
British Giant rabbit Facts for Kids. Kiddle Encyclopedia.