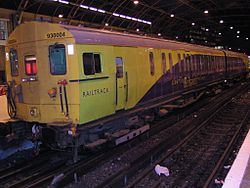 The British Rail Class 930 was reserved for former Southern Region electrical multiple units and diesel-electric multiple units converted for departmental use. Originally the series was reserved for de-icing and, later, sandite units. In recent years, however, other types have also been given numbers in this series. Electric and diesel units are dealt with separately

All content from Kiddle encyclopedia articles (including the article images and facts) can be freely used under Attribution-ShareAlike license, unless stated otherwise. Cite this article:
British Rail Class 930 Facts for Kids. Kiddle Encyclopedia.