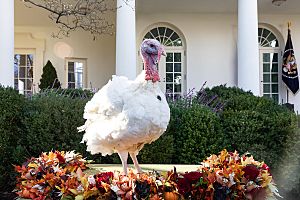 The Broad Breasted White is commercially the most widely used breed of domesticated turkey. These birds have shorter breast bones and larger breasts, sometimes rendering them unable to breed without human assistance (typically via artificial insemination). They produce more breast meat and their pin feathers are less visible when the carcass is dressed due to their white color. These properties have made the breed popular in commercial turkey production but enthusiasts of slow food argue that the development of this breed and the methods in commercial turkey production have come at a cost of less flavor.

These birds are grown in large, fully automated grow-out barns, which may house as many as 10,000 birds. The growing process for these birds has been so well refined, the birds often grow to larger than 40 lbs. Average birds are typically 38-40 lbs. Because of their size, they are flightless and prone to health problems associated with being overweight (due to excess muscle), such as heart disease, respiratory failure and joint damage; even if such turkeys are spared from slaughter (such as those involved in the annual turkey pardons), they usually have short lives as a result. Broad Breasted Whites also have a very high percentage of their eggs hatch, which makes turkey eggs as a food item a rare delicacy.

All content from Kiddle encyclopedia articles (including the article images and facts) can be freely used under Attribution-ShareAlike license, unless stated otherwise. Cite this article:
Broad Breasted White turkey Facts for Kids. Kiddle Encyclopedia.