Bronzeville Children's Museum is a museum in the Calumet Heights community area of the South Side of Chicago. It is the first and only African American children's museum in the United States. Founded in 1998, the museum moved to its current location at 9301 South Stony Island Avenue in the Pill Hill neighborhood in 2008. 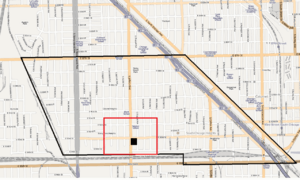 In 1998, Peggy Montes founded the museum in Evergreen Park, Illinois at 97th and Western Avenue. A retired Chicago Public Schools teacher, she was motivated to start the museum after attending a museum convention where she visited numerous children's museums. It was formerly located in the Evergreen Plaza on the lower level in a 1,275-square-foot (118.5 m2) space. The relocated museum opened on August 19, 2000 in a space ten times larger and with three times as more exhibits than the prior home. Construction of the new museum location was sponsored by Commonwealth Edison. Jewel-Osco became a sponsor of the museum in 2000.

The Museum is designed to serve children between the age of 3 and 9. The museum is located away from the Bronzeville, Chicago neighborhood bounded by 26th Street and 51st Street on the north and south, respectively, and Wentworth Avenue and Cottage Grove Avenue. Nonetheless, the museum was named after the neighborhood, which is the neighborhood where African Americans settled in large concentration in Chicago. Although over 100 children's museums serve the youth of America, this is the only one that focuses on African American culture and history.

All content from Kiddle encyclopedia articles (including the article images and facts) can be freely used under Attribution-ShareAlike license, unless stated otherwise. Cite this article:
Bronzeville Children's Museum Facts for Kids. Kiddle Encyclopedia.