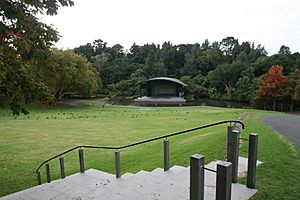 The Bowl of Brooklands

Brooklands is a suburb of New Plymouth, in the Taranaki region of the western North Island of New Zealand. It is located on the southern edge of the city and east of Vogeltown. The area is named after Brooklands farm, established in 1842.

A large part of Brooklands is parkland, with Brooklands Park adjoining the New Plymouth racecourse and Pukekura Park. In 1957, its natural amphitheatre and lake were converted into the Bowl of Brooklands, recognised as one of New Zealand's finest outdoor concert venues. The Bowl plays host to many international acts and is the venue for the New Zealand edition of the WOMAD festival.

The park includes a children's zoo, opened in 1965 and operated by the District Council. A former colonial hospital building built in 1847 was moved to the Brooklands estate in 1904. Named "The Gables" it is New Zealand's oldest surviving hospital building, and functions as a gallery for the Taranaki Arts Society.

The world's only Lawn Bowls Museum is located in Brooklands. It was established in 1980 and has more than 8000 exhibits.

Captain Henry King established Brooklands farm in 1842, as a model farm for the New Zealand Company, promoters of the New Plymouth settlement. The farmhouse was razed by fire in 1861 at the end of the First Taranaki War, but its chimney still stands in Brooklands park today. Between 1875 and 1880 there was an attempt to establish a vineyard in part of the Pukekura stream valley, but it was unsuccessful. An area of 53 acres (21.5 hectares) became the property of prominent Taranaki businessman Newton King, and a mansion named Brooklands was built there in the first decade of the 20th century. When King died in 1927, he left the sum of £10,000 to the New Plymouth parks and reserves board. However, due to some failed business ventures prior to his death, the money was unavailable, and in 1934 the trustees of his estate gifted the property to the New Plymouth borough instead. Unable to find a use for the house, it was demolished in 1936. The suburb expanded south to its current limits in the 1950s.

All content from Kiddle encyclopedia articles (including the article images and facts) can be freely used under Attribution-ShareAlike license, unless stated otherwise. Cite this article:
Brooklands, Taranaki Facts for Kids. Kiddle Encyclopedia.