Kids Encyclopedia Facts
This page is about the park in London. For the Scottish football stadium, see Broomfield Park. 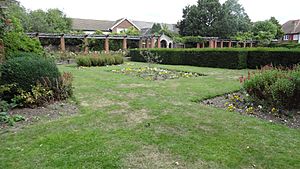 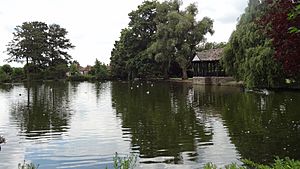 One of the Broomfield Park lakes

Broomfield Park is a 21 hectare public park in Palmers Green in the London Borough of Enfield. It is a Site of Local Importance for Nature Conservation and is registered by English Heritage in the Register of Historic Parks and Gardens for its special historic interest

The park was the garden of Broomfield House, which was built in the sixteenth century, although the oldest part of the present house is about 200 years old. Rocque's map of Middlesex in 1754 shows the park with its current boundaries, with ponds and an avenue. Three of the four ponds date from the eighteenth century, but the northernmost one was created early in the twentieth. In 1902 Southgate Urban District Council purchased the house and grounds, and they were opened to the public in 1903. The house was gutted by fires in the 1980s and 1990s and has remained in a derelict state since then.

In August 2019, a new wetland area was opened in the park, with the aim of creating a new wildlife habitat and improving river water quality nearby.

The park has tennis courts and bowling greens, a conservatory, a bandstand (where music events are occasionally held) a children's playground and a garden of remembrance. Arthur Mee described it as "one of the most charming and varied in all the London area". The park has a variety of wildlife habitats, including the lakes, some small woods and magnificent oak trees. Aquatic plants include rigid hornwort, which is rare in London. There are also breeding birds such as Canada geese, mallard, tufted duck, coot and moorhen. There used to be a running track at the North East of the park. There is a community run cafe staffed by volunteers.

The park is bounded by Alderman's Hill, Powys Lane, Broomfield Lane and Broomfield Avenue, and there is access from all sides.

All content from Kiddle encyclopedia articles (including the article images and facts) can be freely used under Attribution-ShareAlike license, unless stated otherwise. Cite this article:
Broomfield Park, Palmers Green Facts for Kids. Kiddle Encyclopedia.