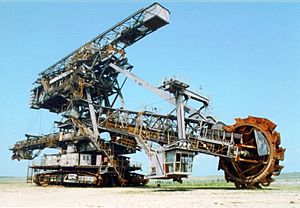 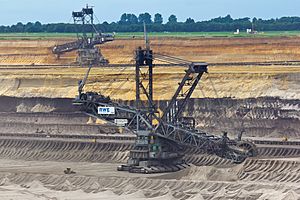 Bucket wheel excavators in Garzweiler surface mine. Note the tiny bulldozer in the foreground (highest magnification)

They are continuous digging machines in large-scale open cast mining operations. What sets BWEs apart from other large-scale mining equipment is their large wheel with a continuous pattern of buckets to scoop material as the wheel turns.

They are among the largest vehicles ever constructed. The biggest bucket-wheel excavator ever built, Bagger 293, is the largest terrestrial (land) vehicle in human history..

All content from Kiddle encyclopedia articles (including the article images and facts) can be freely used under Attribution-ShareAlike license, unless stated otherwise. Cite this article:
Bucket-wheel excavator Facts for Kids. Kiddle Encyclopedia.