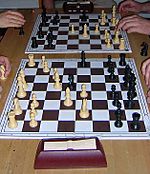 Bughouse chess (also known as transfer chess or exchanged chess) is a version of the game chess. It is played by four people in two teams. Each team has two players. Teammates sit next to each other, and use opposite colored pieces. (This means that one player on a team will have white pieces and the other will have black pieces.) The game is played on two chess boards. Two chess clocks can also be used. Two games of chess are played in at the same time. If a player one game captures a piece, following the regular rules of chess, they give that piece to their partner to use in the other game. The partner can put the piece on the board instead of making a normal move. Pawns can not be placed in the first or last row but other pieces can be placed in any empty space.

If one player wins, that team wins the match.

The game is usually played with a clock, which is often set from as short as one minute (usually when played online) to five minutes or longer. If a player runs out of time, that player's team loses.

There are many variations in how to play bughouse; most of these variations have to do with pawns.

All content from Kiddle encyclopedia articles (including the article images and facts) can be freely used under Attribution-ShareAlike license, unless stated otherwise. Cite this article:
Bughouse chess Facts for Kids. Kiddle Encyclopedia.