Bulls and Cows facts for kids 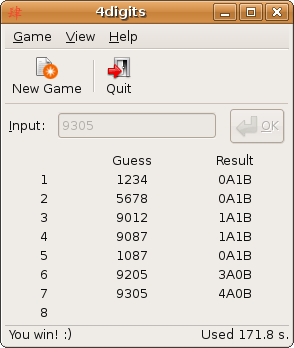 4digits, an Open Source version of Bulls and Cows.

Bulls and Cows (also known as Cows and Bulls or Pigs and Bulls) is an old code-breaking mind or paper and pencil game for two or more players, predating the commercially marketed board game Mastermind.

It is a game that may date back a century or more which uses numbers or words. It is played by two opponents.

The numerical version of the game is usually played with 4 digits, but can also be played with 3 or any other number of digits.

The first player to reveal the other's secret number in the fewest guesses wins the game.

The game may also be played by two teams of players, with the team members discussing their strategy before selecting a move.

A computer program moo, written in 1970 by J. M. Grochow at MIT in the PL/I computer language for the Multics operating system, was among the first Bulls and Cows computer implementations, inspired by a similar program written by Frank King in 1968 and running on the Cambridge University mainframe. Because the game has simple rules, while it is difficult and entertaining, there are many computer variants; it is often included in telephones and PDAs.

This version is usually played orally, but is easier to play if each player (or each team) keeps written notes. It is exactly like the numerical version except instead of 4-digit numbers, 4-letter words are used. They must be real words, according to whatever language or languages you are playing the game in. Alternate versions of the game can be played with 3-letter or 5-letter words, but the 4-letter version is the most popular.

The game play for letter version of this game is as follows.

All content from Kiddle encyclopedia articles (including the article images and facts) can be freely used under Attribution-ShareAlike license, unless stated otherwise. Cite this article:
Bulls and Cows Facts for Kids. Kiddle Encyclopedia.