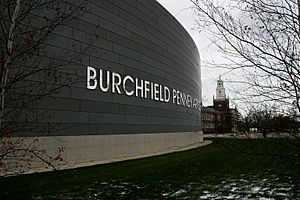 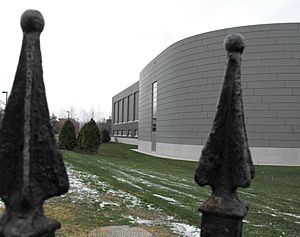 The Burchfield Penney Art Center, or just the Burchfield Penney, is an arts and educational institution part of Buffalo State College, located adjacent to the main campus in Buffalo, New York, United States. Dedicated to the art and vision of American painter Charles E. Burchfield, it was founded in 1966 as the Charles E. Burchfield Center. The center features a museum, library, and activity space for the arts. It maintains the world's largest collection of Burchfield's work, as well as many other distinguished artists of Buffalo, Niagara and Western New York. It sponsors much of the area's contemporary creative community and encourages studies in the arts through its affiliation with Buffalo State College.

Originally named the Charles E. Burchfield Center, the museum held its official opening ceremonies on 9 December 1966 in Rockwell Hall, with Burchfield himself in attendance. Burchfield died just a month and a day after the museum's inauguration.

The museum moved to a new home located on 4.9 acres (20,000 m2) of land at the corner of Elmwood Avenue and Rockwell Road in Buffalo, New York in November 2008. The Burchfield Penney opened in its new location on November 22, 2008, with a 31-hour non-stop grand opening event. The new 84,000-square-foot (7,800 m2) museum is designed by Gwathmey Siegel & Associates Architects.

Today, one of the Burchfield Penney's main goals is to be unique and inviting to the public. Its "Front Yard" exhibit features three tall steel projectors which project constantly-changing artwork onto the exterior of the building. According to Buffalo News critic Colin Dabkowski, "The Front Yard thwarts immediate judgement because it is always in a state of becoming something else." (para. 16). The museum continually connects to educational institutions, specifically Buffalo State College.

The museum's permanent collection spans the late 19th century through today. The collection includes the world's largest collection of Burchfield's works, as well as a large archive of his drawings, notes and journals. Although the museum focuses on the work of Burchfield, it is the only museum dedicated completely to the art and artists of Buffalo, and features more than 30 exhibits each year.

Other components of the collection range from traditional mid-nineteenth century work to contemporary media arts. Notable artists in the collection also include Claire Shuttleworth of Buffalo, as well as the Hallwalls founders: Charles Clough, Robert Longo, Diane Bertolo, Nancy Dwyer, Cindy Sherman, and Michael Zwack. The collection also includes one of the world's largest collections of the documentary photographer Milton Rogovin, paintings and prints by J.J. Lankes (who was a native of Buffalo), and work by Arts and Craft artisans from Roycroft.

All content from Kiddle encyclopedia articles (including the article images and facts) can be freely used under Attribution-ShareAlike license, unless stated otherwise. Cite this article:
Burchfield Penney Art Center Facts for Kids. Kiddle Encyclopedia.