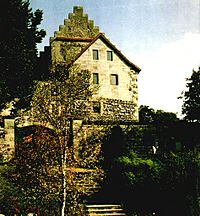 Burg Fürsteneck, view from the south 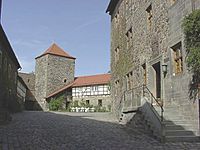 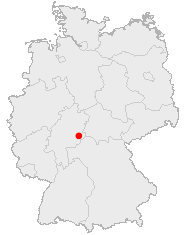 Location of Burg Fürsteneck in Germany

Burg Fürsteneck is a castle, situated in the middle of Germany between the towns of Fulda and Bad Hersfeld. It belongs to the commune of Eiterfeld. The castle lies at an altitude of 406 meters on a small plateau.

Burg Fürsteneck belonged to the monastery of Fulda. It was first mentioned in 1309, but it might have been built one or two hundred years before. Since 1802 it became the property of the German state of Hesse. The castle Burg Fürsteneck is preserved completely in a good condition.

Since 1952 Burg Fürsteneck became an academy for vocational and cultural education. It was rebuilded by the architect Otto Bartning. Each year about 4000 participants take part in one of more than 175 courses, with 15.000 overnight stays.

All content from Kiddle encyclopedia articles (including the article images and facts) can be freely used under Attribution-ShareAlike license, unless stated otherwise. Cite this article:
Burg Fürsteneck Facts for Kids. Kiddle Encyclopedia.