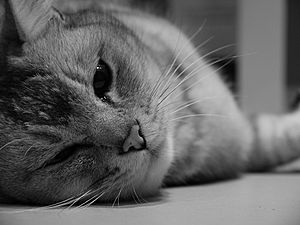 The Burmilla was born in the United Kingdom. Two cats, a Chinchilla Persian named Sanquist and a Brown Tortie Burmese named Fabergé, were both awaiting a partner of their own breed in different rooms. One night, the cleaner left the door open. The two cats bred, producing four kittens born in 1981; thus, a new breed was born.

In GCCF (Governing Council of the Cat Fancy), the Burmilla is considered part of the Asian group. It is accepted in FIFe as the Burmilla. Only the Shaded Silver and Silver Tipped varieties have been recognized in FIFe, CCCA, ACF and CFA as the Burmilla. As of late 2011, the Shaded Golden and Golden Tipped Burmilla are also recognized within FIFe. One governing body in Australia has used the name Australian Tiffanie; however, there is not international acceptance and standardization for this breed - the name "Tiffany" has been used to describe many different breeds, having an appearance from the Ragdoll to the Birman, and may contain any of these breeds and more. Many Australian Tiffanies in Australia contain more than three-quarters Chinchilla Persian and retain the appearance and temperament of the Old-Fashioned Chinchilla Persian. The name's use is declining in favour, due to the lax standards for the breed name, the lack of unique identity and the varied genetic makeup. 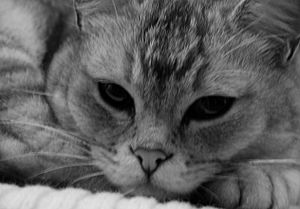 This picture shows the facial features of the Burmilla.

Burmillas are medium-sized with muscular yet elegant bodies, tending to weigh between 3–6 kg. Their distinguishing feature is their sparkling silver coat, and distinctive “make up” lining the nose, lips and eyes.

Gently rounded top of head; medium width between ears; wide at eyebrow level and jaw hinge, tapering to a short, blunt wedge. The profile shows a gentle nose break. Tip of nose and chin should be in line. Chin is firm, with good depth.

Medium to large, broad at base with slightly rounded tips. Ear set with slight forward tilt in profile. Eye shape is large; placed well apart at slight oblique setting; slightly curved upper; line angeled toward the nose, with a fuller curved lower line. Eye color luminous, any shade of green. Some allowance can be made for a gold or yellow tinge in kittens and young adults.

The Burmilla comes in two coat lengths, semi-longhair and shorthair. Semi-longhair Burmilla are known as the Tiffanie in GCCF. The most common (standard) coat is the shorthair. This is a short, close-lying coat, similar in appearance to the Burmese, but with a slightly padded feel. Due to the undercoat, it has a very soft, silky feel. The recessive longhair gene inherited from the Chinchilla Persian can produce longhair Burmilla. These cats have a semi-longhair coat following the lines of the body, with a soft, silky feel and a large plumed tail. The shorthair gene is dominant and where a cat receives one of each, the appearance will be shorthair. Two longhair Burmillas mated together will always produce longhair kittens, while shorthair matings depend on whether the longhair genes are carried by the shorthair parents.

The Burmilla has a variety of coat colours, including black, blue, brown, chocolate and lilac. Red, cream and tortoiseshell (calico) varieties have been bred, these colours are not yet recognized by CCCA in Australia. All the Burmilla coat colours can be expressed in either Burmese expression, or full expression. The Burmilla is now recognized in Shaded Golden and Golden Tipped in FIFe registries, but only Shaded Silver and Silver Tipped everywhere else. The Burmilla's shading comes in two major coat patterns which relate to the depth of colour. These are Tipped and Shaded. Tipped Burmillas have a light dusting of colour (1/8 to 1/4) over the top of a silver or golden undercoat. In the case of Silvers, these cats can appear almost white. Shaded Burmillas have 1/4 - 1/2 as their colour, giving the appearance of a mantle of colour over the back, shoulders and outside of the legs. Smoke pattern is not a Burmilla and in some registries is only allowed to be registered for breeding, not showing, they have almost all colour with only a faint pale base to each hair. The cats have nose leather coloured correspondingly to their coat colour and outlined in the matching coat shading colour. In addition, their paw pads correspond to the coat colouring: Black Silver cats have black or very dark brown paw pads, Brown will have dark brown, Chocolate have pinkish brown, Blues have Blue-grey and Lilacs have Dove grey tinged with pink.

Since the Burmilla inherits its colour ranges from two different breeds, there is also the possibility of the entire Burmese spectrum of colours (Black, Brown, Blue, Chocolate, Lilac and all the O gene range, both in Burmese Expression and in Full Expression). The inheritance of Silver also means that expression of colour can be variable; silver can darken and cool colour. However, since the Burmilla has a shaded coat pattern, it can be difficult to identify the various subtle shades of Burmese colouring that are recessive to the Persian colouring. 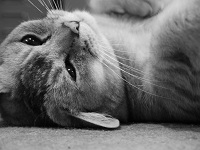 This Burmilla cat demonstrates the playful 'kitten-like' traits of the breed.

The Burmilla is quite an irreverent and independent cat who adores its owner and displays many kitten-like characteristics, even into adulthood. In temperament they are sociable, playful and affectionate and get along well with children and other animals. Burmillas should be fed a balanced diet of raw meat, canned food, or dry food. Weekly brushing of the coat is recommended.

All content from Kiddle encyclopedia articles (including the article images and facts) can be freely used under Attribution-ShareAlike license, unless stated otherwise. Cite this article:
Burmilla Facts for Kids. Kiddle Encyclopedia.