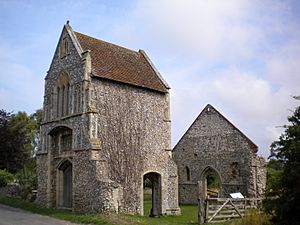 Burnham Norton Friary was a Carmelite (White Friars) friary near Burnham Market in Norfolk, England. It is now a ruin.

The friary was founded by Sir William Calthorp and Sir Ralph Hemenhale in 1241, the first Carmelite monastery to be founded following the expulsion of the order from Mount Carmel in Sinai in 1238. The theologian monk Robert Bale was prior of Burnham Norton for a time until his death in 1503. The friary was closed down in 1538, when occupied by only four poor monks, as part of the Dissolution of the Monasteries under King Henry VIII and passed undamaged into the ownership of Sir Richard Gresham.

Only the grade I listed ruined gatehouse and the adjacent grade II* listed free standing gable end of an unknown building remain. The latter's closeness to the gatehouse suggests it was not part of the friary church.

All content from Kiddle encyclopedia articles (including the article images and facts) can be freely used under Attribution-ShareAlike license, unless stated otherwise. Cite this article:
Burnham Norton Friary Facts for Kids. Kiddle Encyclopedia.