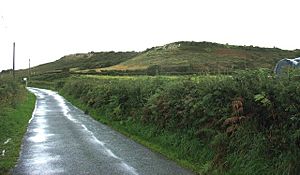 Bwrdd Arthur (meaning "Arthur's Table"), also known as Din Sylwy, is a 164 metres (538 feet) flat-topped limestone hill on the island of Anglesey. Located on the eastern end of Red Wharf Bay, some 3 kilometres north west of Llangoed, it is noteworthy from the evidence of pre-historic occupation and as a Site of Special Scientific Interest designated for its botanical interest.

The tiny medieval church of St Michael is on the eastern side of the hill fort.

The whole site, which is in private ownership, is a scheduled monument and is believed to have been occupied as a significant hill fort both before and during the Roman invasion

All content from Kiddle encyclopedia articles (including the article images and facts) can be freely used under Attribution-ShareAlike license, unless stated otherwise. Cite this article:
Bwrdd Arthur Facts for Kids. Kiddle Encyclopedia.