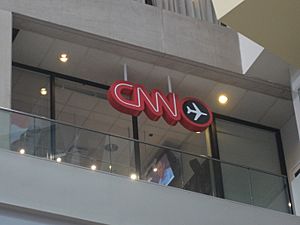 CNN Airport is an American television network. Owned and operated by WarnerMedia, it is a special version of CNN that only plays in United States airports. The network broadcasts news, entertainment, stock market updates, weather, and travel news to 58 airports across the United States. CNN pays airports to show the channel exclusively on their monitors.

CNN Airport's 24-hour schedule is described as roughly 16% news, 19% live sports, 24% lifestyle, 24% travel, and 10% for custom messages from airports if they wish to use the timeslot.

On January 12, 2021, CNN's president Jeffrey Zucker announced that the network would be closed by the end of March.

All content from Kiddle encyclopedia articles (including the article images and facts) can be freely used under Attribution-ShareAlike license, unless stated otherwise. Cite this article:
CNN Airport Facts for Kids. Kiddle Encyclopedia.