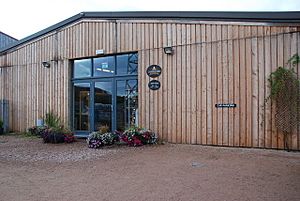 Cairngorm Brewery is a brewery based in Aviemore, in the Highlands of Scotland. It is situated in the Dalfaber Industrial Estate, at the north end of the village, and is within the Cairngorms National Park.

Cairngorm produce a range of beers, which are available all year, in cask or bottle. They also produce an number of seasonal cask beers. Permanent beers include:

Black Gold and Trade Winds have won a number of awards, in the Champion Beer of Scotland, presented by the Campaign for Real Ale.

All content from Kiddle encyclopedia articles (including the article images and facts) can be freely used under Attribution-ShareAlike license, unless stated otherwise. Cite this article:
Cairngorm Brewery Facts for Kids. Kiddle Encyclopedia.