Caladenia busselliana, commonly known as Bussell's spider orchid, is a plant in the orchid family Orchidaceae and is endemic to a small area in the south-west of Western Australia. It is a rare orchid with an erect, hairy leaf and up to three pale yellow flowers. Only about fifty specimens are known and it is threatened by habitat destruction and by too-frequent or too infrequent bushfires. 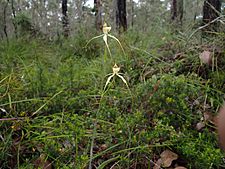 Caladenia busselliana is a terrestrial, perennial, deciduous, herb with an underground tuber and a single erect, hairy leaf 20–30 cm (8–10 in) long and 5–10 mm (0.2–0.4 in) wide. There are up to three pale yellow flowers on a stem 20–30 cm (8–10 in) high. The flowers are 6–10 cm (2–4 in) long and 5–8 cm (2–3 in) wide. The lateral sepals and petals spread widely and the sepals are thickened. The labellum is pale yellow to white and lacks the red tip common to similar spider orchids. The sides of the labellum have narrow teeth or calli which have a "clubbed" end. There are four or more rows of red-tipped calli along the centre of the labellum. Flowering occurs between September and October and is followed by a non-fleshy, dehiscent capsule containing a large number of seeds.

Caladenia busselliana was first formally described by Stephen Hopper and Andrew Brown in 2001 from a specimen collected by Greg Bussell near Quindalup and the description was published in Nuytsia. The specific epithet (busselliana) honours the collector of the type specimen.

Bussell's spider orchid grows in swampy jarrah forest and marri woodland, often with green kangaroo paw, (Anigozanthos viridis) and the more common swamp spider orchid (Caladenia paludosa). It is only known from two small areas near Vasse and Yallingup at the northern end of the Leeuwin-Naturaliste ridge in the Swan Coastal Plain biogeographic region.

All content from Kiddle encyclopedia articles (including the article images and facts) can be freely used under Attribution-ShareAlike license, unless stated otherwise. Cite this article:
Caladenia busselliana Facts for Kids. Kiddle Encyclopedia.