Caladenia dundasiae, commonly known as the Patricia's spider orchid and Dundas spider orchid is a species of orchid endemic to a small area in the south-west of Western Australia. It is a rare orchid with a single hairy leaf and one or two, usually red flowers with thin, stiffly-held lateral sepals and petals. 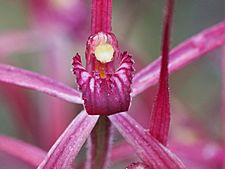 This species is similar to C. erythrochila but has more stiffly-held and shorter sepals and petals.

Caladenia dundasiae was first described by Stephen Hopper and Andrew Brown in 2001 in from a specimen collected near the Watheroo. The description was published in Nuytsia. The specific epithet (dundasiae) honours the botanical artist, Patricia Dundas.

Patricia's spider orchid is only known from a small area near Watheroo where it grows in York gum and wandoo woodland in the Avon Wheatbelt and Geraldton Sandplains biogeographic regions.

Caladenia dundasiae is classified as "Priority One" by the Western Australian Government Department of Parks and Wildlife, meaning that it is known from only one or a few locations which are potentially at risk.

All content from Kiddle encyclopedia articles (including the article images and facts) can be freely used under Attribution-ShareAlike license, unless stated otherwise. Cite this article:
Caladenia dundasiae Facts for Kids. Kiddle Encyclopedia.