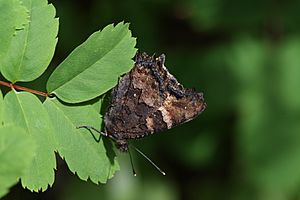 On Sorbus sitchensis. The underside of the wing resembles a dead leaf.

The California tortoiseshell (Nymphalis californica) is a butterfly of the family Nymphalidae.

It is recognized for the top of its wings being orange with big black spots (used mainly for camouflage). The browns and grays of the wing underside make it resemble a dead leaf when the wings are closed. Its wingspan varies from 3.2 to 7 cm (1+1⁄4–2+3⁄4 inches).

All content from Kiddle encyclopedia articles (including the article images and facts) can be freely used under Attribution-ShareAlike license, unless stated otherwise. Cite this article:
California tortoiseshell Facts for Kids. Kiddle Encyclopedia.