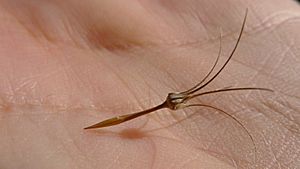 Calytrix flavescens, commonly known as summer starflower, is a species of plant in the myrtle family Myrtaceae that is endemic to Western Australia.

The shrub typically grows to a height of 0.3 to 0.8 metres (1 to 3 ft) and a width of 0.3 to 0.5 metres (1 to 2 ft). It usually blooms between October and January producing yellow star-shaped flowers. The plant is perennial and has a short lifespan. The foliage is evergreen with a dense open habit.

The species was first formally described by the botanist Allan Cunningham in 1834 in the journal Botanical Magazine.

Found on sand-plains, gentle slopes and sometimes in swampy areas in the Mid West, Wheatbelt, South West and Great Southern regions of Western Australia where it grows on sandy soils over granite, laterite or sandstone.

It grows from seed but an be propagated from softwood or hardwood cuttings. Grown in pots and gardens as a feature plant, it attracts bees when in flower and flowers can be cut. It is both drought resistant and frost tolerant.

All content from Kiddle encyclopedia articles (including the article images and facts) can be freely used under Attribution-ShareAlike license, unless stated otherwise. Cite this article:
Calytrix flavescens Facts for Kids. Kiddle Encyclopedia.