Camden Park is a twenty-six acre amusement park located near Huntington, West Virginia. Established in 1903 as a picnic spot by the Camden Interstate Railway Company, it is one of only thirteen trolley parks that remain open in the United States. Whereas most trolley parks were located at the end of trolley lines, Camden Park is unusual in that it was built where riders traveling between Huntington and nearby cities would stop to change lines. Not long after opening, the park soon gained a carousel and other roadside attractions. Camden Park is West Virginia's only amusement park. The park is home to more than thirty rides and attractions, including a full-size traditional wooden roller coaster, the Big Dipper, and several other vintage rides.

Over the years, Camden Park has featured a swimming pool, a roller rink, and even a small zoo. Today, the park hosts a variety of events throughout the year, including live musical performances as part of the "Hot Summer Nights" concert series. Other events include the "Children's Festival," "Coca-Cola Days," and the "Halloween Spooktacular." The park is typically open six days a week from late May to early August, with a more limited schedule in late August, and select dates in September and October.

Camden Park was established as a picnic spot by the Camden Interstate Railway Company in 1903, and named after former West Virginia Senator Johnson N. Camden. As steamboat traffic gave way to intercity trolleys, the park was located near the mouth of Twelvepole Creek, where riders traveling between Huntington, Ceredo, Kenova, Ashland, and Coal Grove would stop to change lines.

The first amusement park ride, a carousel, was built around 1903; the park owners consider this to be the official date of the park's founding, celebrating the park's eightieth anniversary in 1983, and centennial in 2003; promotional materials produced in 2013 describe the park as having provided "110 years" of fun. About 1912, the park's first roller coaster was added. Described as the "new sensation," the attraction featured a tall hill, a spiraling section, and several dips of various lengths.

Eustace Via purchased Camden Park from the Ohio Valley Electric Railway in 1916, and operated the park until the end of World War II, adding various rides and attractions. The park was subsequently sold to a group of investors, including Harry Nudd, who operated the park. Deeming the original roller coaster unsafe, the owners demolished it in the summer of 1957. Nudd obtained plans for what became the Big Dipper, a new wooden roller coaster that opened in the summer of 1958.

The park subsequently came into the hands of J.P. Boylin, whose family continues to operate the park and its attractions. Many of the attractions are vintage amusement park rides, such as the carousel, The Whip, Tilt-A-Whirl, Paratrooper, Dodgem Cars, and Scrambler. The park also features a miniature railway with a covered bridge, a vintage Pretzel Haunted House ride, swan-shaped pedal boats, a miniature golf course, arcade games, shooting galleries, and a restaurant. The park once featured a roller rink, and a paddleboat attraction known as the Camden Queen, which took riders on a short excursion up the Ohio River.

In the center of the park is an Indian mound, once used as a picnic area, but now heavily grown over with trees. Many large sycamores formerly lined the park's midway, but these appear to have been cut down in the 1990s. 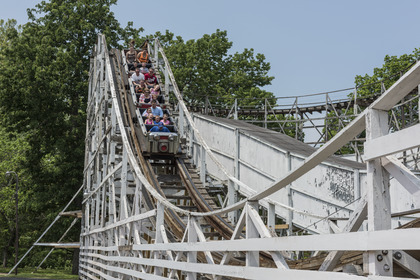 Riders enjoy a spin on the Big Dipper. 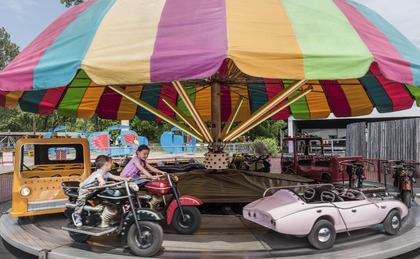 All content from Kiddle encyclopedia articles (including the article images and facts) can be freely used under Attribution-ShareAlike license, unless stated otherwise. Cite this article:
Camden Park (amusement park) Facts for Kids. Kiddle Encyclopedia.