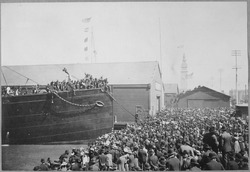 Camp Merritt, California was a U.S. military camp for American troops destined for the Philippines during the Spanish–American War. Formerly a racetrack, the camp, named for General Wesley Merritt commanding officer of the Philippine expeditionary forces and the Eighth Corps at the time, was located between Point Lobos Avenue (Geary) and Fulton Street between First (Arguello) and Sixth in San Francisco, California.

The camp was abandoned about August 27, 1898 when the remaining troops were moved to Camps Merriam and Miller a bit north at Presidio of San Francisco. Camp Merritt existed only long enough for the fleet to be assembled for the 18,000 troops disembarking for the Philippines to be sent off. Problems with disease, mostly measles and typhoid, also accelerated its closing.

All content from Kiddle encyclopedia articles (including the article images and facts) can be freely used under Attribution-ShareAlike license, unless stated otherwise. Cite this article:
Camp Merritt, California Facts for Kids. Kiddle Encyclopedia.