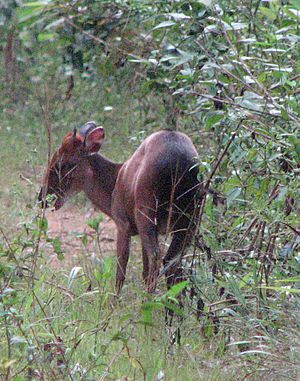 Campo Ma'an National Park is a national park of Cameroon. It is in the South Region in the Océan department. It covers 64,064 hectare.

The park was created in 2000 by combining the Campo Wildlife Reserve and the Ma’an Production Reserve.

The biodiversity of the area has wide range of plants and animals species including several taxonomic endemics. The mammal species reported are 87. These include elephants, lowland gorillas, chimpanzees, hippos, giant pangolins, black colobus, mandrills and leopards. Reptile species reported are 122, and fish species are 165. It also has more than 300 bird species.

All content from Kiddle encyclopedia articles (including the article images and facts) can be freely used under Attribution-ShareAlike license, unless stated otherwise. Cite this article:
Campo Ma'an National Park Facts for Kids. Kiddle Encyclopedia.