Canberra Glassworks is an Australian gallery in Canberra and glass art studio open to the general public to view the glass artists working. Opened in May 2007 by Jon Stanhope, it is the largest dedicated glass studio facility in Australia. 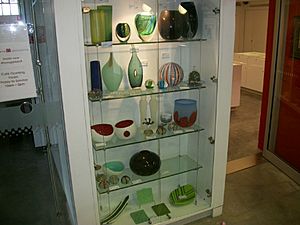 A display at the Glassworks 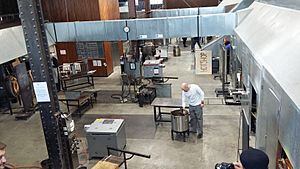 It is located in the Kingston Powerhouse which was designed by John Smith Murdoch and constructed from 1913-1915. The power station generated electricity until 1957 and is Canberra's oldest public building.

Particular effort was made to preserve the original building and surroundings where possible, and was developed within a framework of Ecologically Sustainable Design (ESD).

artsACT and Jon Stanhope, Canberran Chief Minister and Minister for the Arts announced the name of the centre in late 2005, specifically to highlight 'Canberra' as a being potentially well reputed both nationally and internationally for studio glass and the term 'glassworks' to be clear about what equipment and facilities where available at the centre to artists as well as to the general public.

The centre is strongly linked with the ANU School of Art Glass Workshop, whose founding workshop head Klaus Moje was pivotal in establishing the centre. The current workshop head Richard Whiteley is also very involved with the centre and has work on display.

The centre was originally scheduled to be opened in September 2006, but was opened in May 2007.

The creation of Glassworks and renovation of this building is part of the redevelopment of the lake foreshore surrounding Kingston.

The studio contains a public viewing gallery above the main hotshop areas as well as public access walkways around all glass working areas.

Glassworks also offers courses to non-practicing artists and members of the public, as well as students. There is also a volunteer program.

The studio also offers members of the general public to commission works through artists working at the studio.

All content from Kiddle encyclopedia articles (including the article images and facts) can be freely used under Attribution-ShareAlike license, unless stated otherwise. Cite this article:
Canberra Glassworks Facts for Kids. Kiddle Encyclopedia.